Getting inside the mind of a burglar 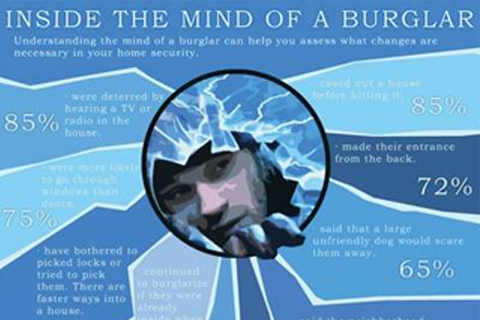 80% of burglars are opportunists, selecting their targets on the spur of the moment.

They are on the lookout for properties that appear to be vulnerable yet promise to make their efforts worthwhile.

Here are some facts and figures relating to break-ins in the UK. They explain some of the thoughts a burglar has when eyeing up a potential target property:

There are some simple precautions that people can take to put off potential opportunist thieves. A ‘beware of the dog’ sign or Neighbourhood Watch sticker in the window is a deterrent, as is an alarm box, even if it is empty – the would-be burglar won’t be going up a ladder to check!

If you are going out at night, leave some lights on with the curtains closed and also consider leaving a radio or TV on. Should you be away for a longer period of time, have a friend or neighbour pop in regularly to draw curtains move the post away from the letterbox where it might be seen building up.

For more specific advice on any aspect of security for your property contact Glevum Security on 01452 729723 or visit their website, glevum-security.co.uk.