Don’t mind me Droning on … 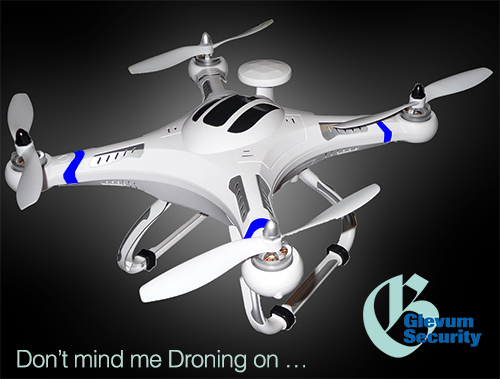 I never cease to be amazed at the ingenuity of people to utilise the latest advances in technology in the security business.

Can you begin to imagine what the invention of the walkie talkie in the 20th Century meant for security staff? Instant communication would have instantly led to quicker and more effective responses to incidents.

One of the latest developments is the introduction of drones. When used as a highly mobile monitoring or delivery device they can be very useful, putting a hard-to-reach rooftop under surveillance or sending a piece of equipment to a distant part of a maintenance site.

There is always a down side when the technology falls into the wrong hands, of course. Criminals have embraced drone technology in a number of ingenious ways. They have been used to deliver illegal substances and weapons into prisons, for example.

There are also wider security issues. What if a drone infringes airspace around an airport, for instance? Flights would have to be cancelled and planes in the air diverted at enormous expense and with numerous knock on effects.

Fortunately, security experts around the globe are equally adept at adapting and exploiting new technology. There is already a wide range of technology aimed at monitoring and disabling drones in operation at sensitive sites such as government buildings and prisons.

I like to think that we at Glevum Security are constantly improving our adoption and response to innovative technology. For advice on all aspect of security in the Gloucestershire area contact Glevum Security on 01452 729723 or take a look at our website, glevum-security.co.uk.