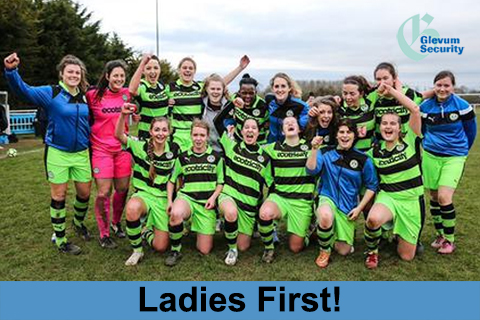 Forest Green Rovers Ladies, that is, as they have won the South West Women’s Football League (Eastern Division) in tremendous style after a traumatic pre-season.

The 2016-17 season is the third season that Glevum Security has sponsored the Ladies first team shirts, following some previous dealings with the men’s team.

We have helped out in various other capacities, including having Steve drive to Exeter to report live on a crucial game, but perhaps that is a story for another day.

I asked Rich Hall from FGR’s media team to sum up the ladies season for us.

After a traumatic pre-season, in which we lost nearly all the 1st team players, the club has re-grouped with a very young 1st team, as well as U18s and U16s teams.

It has been a successful season with the 1st team winning the South West Women’s Football League (Eastern Division), the U18s in contention for their league, as well as the County Cup semi-final, and the U16s winning their league and reaching the League Cup final.

The plan for next season is to bring the U18s through into senior ladies football, and to concentrate on getting age group teams set up for the future.

Exciting times for the club and we are very pleased to play a part.