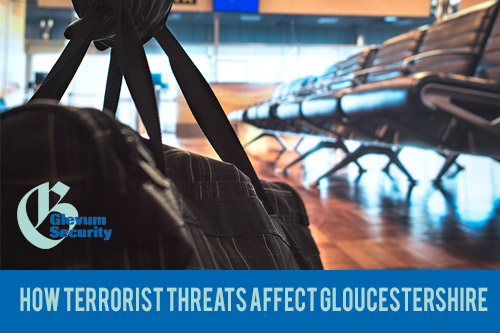 Since the summer, press stories about the perceived terrorist threat in the UK have reduced.  Does this mean that the threat has gone away and what is the impact on Gloucestershire?

36 people have died in terrorist attacks so far this year, as atrocities have occurred at Westminster, Manchester Arena, London Bridge and the nearby Borough Market.  In addition, a bomb was left on a tube train at Parsons Green in West London but fortunately it failed to explode.

Counter terrorist police reported that a total of 13 potential terror attacks have been thwarted in the last four years.  In addition, there are around 500 live counter terrorism investigations underway at any given time.  They particularly praised members of the public for the many reports they received which were then actioned.

A vital role in the anti-terrorist fight is played by Cheltenham’s GCHQ.  Although they cannot reveal the exact role they have played in the foiling of terrorist attacks, it is clear that they are heavily involved in the surveillance of suspects and in supplying information and intelligence to security agencies and police forces across the country.

The threat in the UK from international terrorism is still assessed as ‘severe’ meaning that further attacks are highly likely.  At points in May and September, the threat was increased to the maximum level, ‘critical’, which indicated that an attack was imminent.

While there have been no incidents in Gloucestershire, the area has felt the impact of the threat.  The inlingua Cheltenham language school, for instance, reported that 200 potential students cancelled their trips in the summer.  Although there had been no direct attacks in Cheltenham, the proximity to London and travelling via Heathrow and Gatwick airports were cited as reasons for some of the cancellations.

So the message for Gloucestershire seems to be to remain vigilant at all times and report anything suspicious as soon as possible.  Any concerns you may have can be reported via the Gloucestershire Police website.

The terrorist threat continues to be real and still with us and any part of the country could be affected.