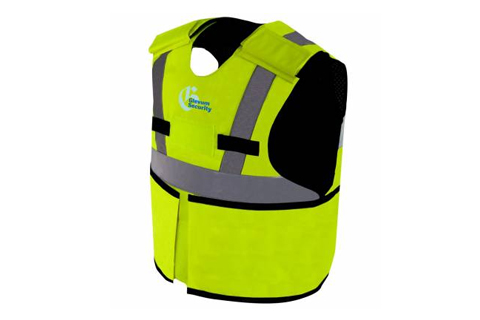 At times, security personnel place themselves in dangerous situations to ensure the safety of others.

The risks they face depend greatly on the location they’re based in, their responsibilities & duties, and the demographic of people they will interact with.

For example, at a cheap nightclub or bar in a run-down area, door supervisors are much more likely to deal with aggressive drunks and potential drug-related problems than those manning the entrance of an exclusive restaurant in an affluent area. However, security personnel should be prepared for all eventualities, remaining alert and equipping themselves with body armour.

There are multiple types of armour produced today – so how do you know which is right for you? …

Understanding Body Armour
Over the years, as protective technologies have evolved, body armour has become much more lightweight and streamlined, ensuring maximum comfort and functionality. Three different types are available: ballistic, edged blade, and spike. Each of these categories features numerous levels, protecting against specific threats. For more information on body armour protection levels visit www.safeguardclothing.co.uk from here you can see the different levels for each protection type.

Edged Blade Armour
Otherwise known as stab vests, this type of armour is made with tightly-woven Kevlar, which creates friction against blades to stop them tearing through. Generally, stab vests are lightweight and thin enough to be worn underneath other layers for discrete protection – many security workers wear them for day-to-day defence, including retail-based guards, door supervisors, close-protection operatives, and those based at large public events.

Many stab vests designed to be worn close to the skin – known as covert vests, available in ballistic and spike styles also – feature breathable materials, which absorb sweat and distribute it throughout the material, allowing the wearer to remain cool and comfortable over long periods.

Ballistic Armour
Bulletproof vests may seem an extreme precaution, but some security workers may well face a real risk of gunfire depending on their location. For guards based in high-value jewellery shops, banks, and cash-in-transit trucks, the threat of being fired upon is considerably higher than those working in other locations – professional armed thieves are more likely to target these, given the greater amount of money/goods they can seize.

Bulletproof armour is made with multiple layers of Kevlar, which absorb a bullet’s energy on impact, slowing it to a halt as it passes through the topmost layers. Five levels of protection are available – IIA, II, IIIA, III, and IV – designed to defend against most types of ammunition, from lower-velocity handgun rounds to high-calibre, armour-piercing ones.

While vests at levels IIA – IIIA feature a softer, more flexible design, those at III and IV include ballistic plates (of steel and ceramics respectively) to stop more lethal rounds. Bulletproof vests can be worn over or underneath clothing, depending on the amount of discretion the wearer needs: for those working as close-protection operatives, a low-profile is always key, while cash-in-transit guards have no need for stealth. Manufacturers now create covert vests offering level IV protection lightweight enough to wear against the skin, ensuring those needing to remain low-key can rely on the highest amount of protection available.

Spike Protection
This can be added to stab and ballistic vests for more comprehensive defence. Spike protection is made with Kevlar in an even-tighter weave than that used in stab vests, ensuring gaps between fibres are narrow enough to trap pointed tips (found on needles, sharpened objects etc.). Security workers have been stabbed with hypodermic needles on occasion, usually while trying to restrain an aggressive individual – not only can this cause severe injury, but there is also a risk of contamination. Guards may also wish to wear anti-stab gloves as well, to protect the hands when attempting to disarm an attacker.

When buying body armour, always seek expert advice if ever in doubt: your life may someday depend on making the right decision.

Talk to Glevum Security regarding all your security needs on 01452 729713 or visit glevum-security.co.uk.